Why We Resist Diversity of Thought

in Diversity of Thought

See if you can imagine this scenario: You're in the middle of a heated discussion with someone about a big political, religious or personal topic. The conversation is getting tense, on the verge of an argument. Tempers are rising. Voices are getting louder—or the type has moved to ALL CAPS. You’re feeling angry, maybe even a little afraid. On the one hand, you really want to win this debate. On the other, you just want to run away.

We live in a pretty charged atmosphere these days, so you probably didn’t have to do too much imagining to conjure up that image in your mind. And sure, we know that a diversity of thought and perspectives can be valuable, but knowing that doesn’t make these moments any easier to deal with.

In fact, there’s a lot going on in your head in these kinds of situations. Your bloodstream is flooded with cortisol, adrenaline and other hormones that fuel the “fight or flight” response. Your neocortex, the part of your brain that controls rational thought, is on a temporary time out. You're triggered—not really thinking, just reacting.

More than likely, your reaction is based on the beliefs you’ve developed over time. You’ve become attached to those beliefs, and when you encounter an idea that goes against them, your natural instinct is to argue against it, to resist that challenge. Diversity of thought is one thing, but don’t challenge me when I’m “right.”

This mental resistance isn’t easy to overcome. So much of it is unconscious and visceral. It can feel hard to explain, even to ourselves. And there’s probably a part of you that feels like it would be compromising—or losing—to agree with or embrace the “other side’s” point of view, no matter how many facts or how much supporting evidence is presented to you.

But as uncomfortable as it is, there are some benefits to giving up that need to be right. Moments of resistance can actually lead you to something new—if you let them.

Think Before You React: Leaning in to Diversity of Thought

At work, we need diversity of thought and ideas to solve tough problems and make smart decisions. But we won’t get anywhere if everyone’s just digging in deeper and deeper into their separate “sides.” Diversity of thought (and resistance to it) also crops up in our personal lives. With the holidays around the corner, many people are worried about family arguments and debates getting out of hand over the dinner table.

So, what can you do to overcome that negative resistance response? How can you reset your rational brain? For starters, you need to think before you react. Here are a few tips to help you do that:

Pause before responding: Just stop for a few seconds and notice what’s going on inside you. Calm down and let your neocortex get back online. Then make a choice about what to do next. Your response will be clearer and wiser.

If you know there’s a heated topic that’s likely to get everyone worked up, try this variation: Preempt the drama by putting your reaction down in writing. Write an email about what you might say during the heat of an argument—and then don't send it. The act of writing can help you calm down, process your thoughts and put things in perspective. You can also try this tactic after a heated discussion to change your frame of mind about it and defuse further tension.

Listen—and remember that listening doesn’t mean agreeing: You can listen to anybody say anything at any time. That doesn’t mean you have to agree with any of it. In fact, you can express your disagreement calmly and clearly. You just don't have to do it right away—especially while someone else is talking. Take time to really “get” the other person's point of view before you start criticizing it.

To do this, you need to remember that you are more than your current stock of ideas. The point of listening is to discover, not persuade. You can hold an opposing point of view for a few moments without sacrificing who you are. You can even change your mind, especially when logic and evidence weigh in favor of it.

Respond by being curious: You can also build dialogue by focusing on questions before answers, especially during the early stages of a conversation. At this point, you’re not trying to arrive at an answer, argue a side or make an immediate decision. Your goal is to get curious and see more pieces of the puzzle. You want a mindset that’s inclusive and expansive—one that really allows you to use the full diversity of thought available to you.

Here are some questions you can ask yourself to keep an open mind:

Lean in and enjoy the results: Leaning in to diversity of thought comes with surprising rewards. You get new ideas. You get to relax and ask questions instead of trying to control the conversation. You get to step inside the mind and heart of other people and see the world through their eyes. You get to move beyond “either-or” to “and”—the place where you discover unexpected connections between ideas. Most of all, you get to learn and enjoy better relationships.

Remember: There are better games to play in life than scoring debating points. In the end, learning beats winning. And even when you are right, you don’t have to be so “right” about it. 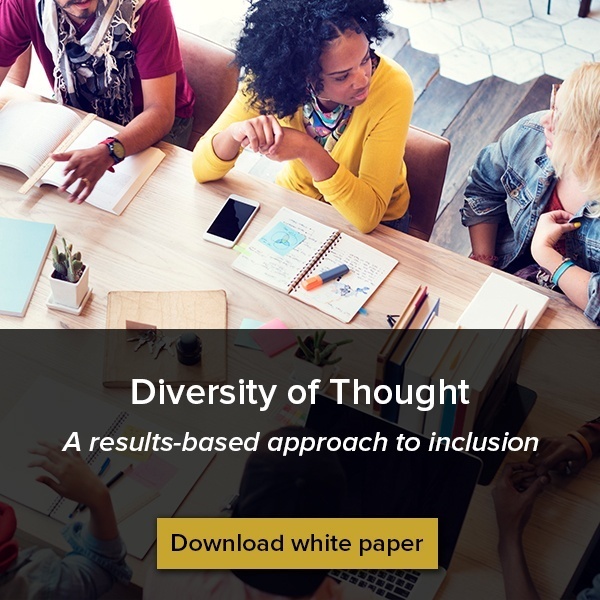